Today was a day of jubilation as we handed over the Barbershop and Salon to the Zimbabwe Republic Police. Our Pastoral Care team oversaw the execution of this project and it was completed towards the end of 2021. The Barbershop project was conceived as an idea to give life to the Commissioner General’s Welfare Fund (CGWF). The CGWF is administered by the National Chaplaincy Department, headed by the Chaplain General of Police. The main tributary channeling resources into this fund was the Police fun fare, an annual event that drew thousands of participants from all corners of Zimbabwe. However, this event was dealt a heavy blow and left in the intensive care unit by the Covid-19 pandemic. As a crowd puller event it was automatically classified as a potential super-spreader. The CGWF was left writhing in agony. From supporting more than 500 orphans and vulnerable children (OVCs) of the deceased members of police, the fund is now catering for less than 100 children. The Barbershop is therefore a way and means to resuscitate the CGWF so that the safety net could cover more and more OVCs. 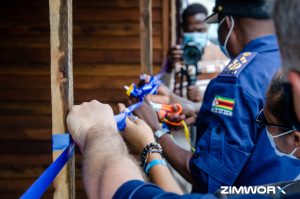 The handover ceremony was presided over by the Deputy Commissioner General- Human Resources, DCG ME Ngirandi, who was representing the Commissioner General of Police. Accepting the Barbershop and the equipment DCG Ngirandi quoted James 2: 14-17, describing Zimworx’s gift to the police as nothing but an exhibition of faith in action. The Chaplain General Rev, Dr, JT Doyce referred to the parable of the good Samaritan (Luke 10: 25ff), in describing the relationship between Zimworx and the Zimbabwe Republic Police. He likened the Police situation to that of the man who was left for dead by robbers, and Zimworx as the good Samaritan. 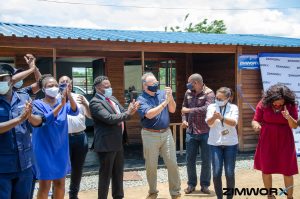 The Head of Zimworx, who is also the Human Resources Director, Nabeelah Jogee described our past, present and future assistance as an exhibition of our 5 core values. Our intervention was inspired by our commitment to excellence, while making a global impact for the kingdom. As a company we are also  driven by the quest to be inspirational to others, bringing them to a realization that sharing is part of exercising good stewardship of the blessings bestowed upon us.

We are aware that the execution of this project could not have seen its successful completion without the generosity of our Managing Partners, our clients and our benefactors. For these we pray, “Be pleased Oh Lord to reward with good health and success, to all those who do good to us for your name’s  sake. Amen”.

Pure and undefiled religion before our God and Father is this: to look after orphans and widows in their distress and to keep oneself unstained by the world.